The legalization of cannabis is sweeping the US. In some states, marijuana is legalized for medicinal purposes only. In others, the Green revolution led to the legalization of marijuana for recreational use. Connecticut is the latest state in which people age 21 will be allowed to possess and consume cannabis starting on July 1. There are face-paced changes in the field, and that trend will continue in the future.

The number of states in which marijuana reform bills passed keeps going up. It’s clear that cannabis is becoming mainstream, and the industry is attracting various types of investors, including actors, musicians, and athletes. Many celebrities are getting involved and embracing the opportunity the legalization of marijuana across the US provides.

The Value the Stars See in Creating Cannabis Brands

Now that marijuana becomes socially acceptable, the number of stars deciding to jump on the bandwagon and create cannabis brands rises. The current situation around weed and the fact many famous people take the chance to step out on the market begs the question of the value celebrities see in creating cannabis brands. Is it because they are passionate about it? Or is it just about the money?

The current situation allowed many stars to admit they are using weed. On the other hand, there are many of those who did it publicly long before the revolution. Some of the celebrity weed brand creators are doing it because they love weed, use it, and are passionate about it. Many are pretty into every segment of the business.

Now let’s face it, not everyone is passionate about it. Some celebrities are probably creating brands because they see an excellent business opportunity and may not even use weed. After all, the industry is flourishing, and it is pretty popular. Those who are in it all because they saw an opportunity to earn more will probably call it a day on a marketing level. Being involved in the story of the brand and business in general and doing it far beyond the marketing level – that’s what makes the difference.

“I think the ones that work better are a little bit more authentic, like Seth Rogen and Jim Belushi are doing, where they are actually involved in the business themselves in an authentic way,” said Andrew Deangelo, cannabis industry leader, and business consultant. “They actually care about the products. They care about what they’re producing, they’re connecting with the customers, they’re leaning into it,” he added.

Celebrities With Their Own Cannabis Brands

Belushi’s Farm is based in Oregon. It was established in 2015 to cultivate premium cannabis for medical and recreational purposes on 93 acres. For Jim Belushi, this is far more than just adding the name and creating the brand. He became a farmer entirely dedicated to the plant. His older brother John died from a drug overdose, and cannabis farming helped Jim heal.

The actor/farmer has a reality TV show Growing Belushi, about the adventures of being the farmer. The second episode is about Jim’s trip to Colombia to research the strains of cannabis.

“I wanted to get down in that coca field and pull it up from the roots and look at it in the eye and say, “Stop hurting people and families.” If they could turn those fields into cannabis, those families could make their living farming, and they could make a plant that could heal people – spiritually, physically, emotionally.”, Jim Belushi said. 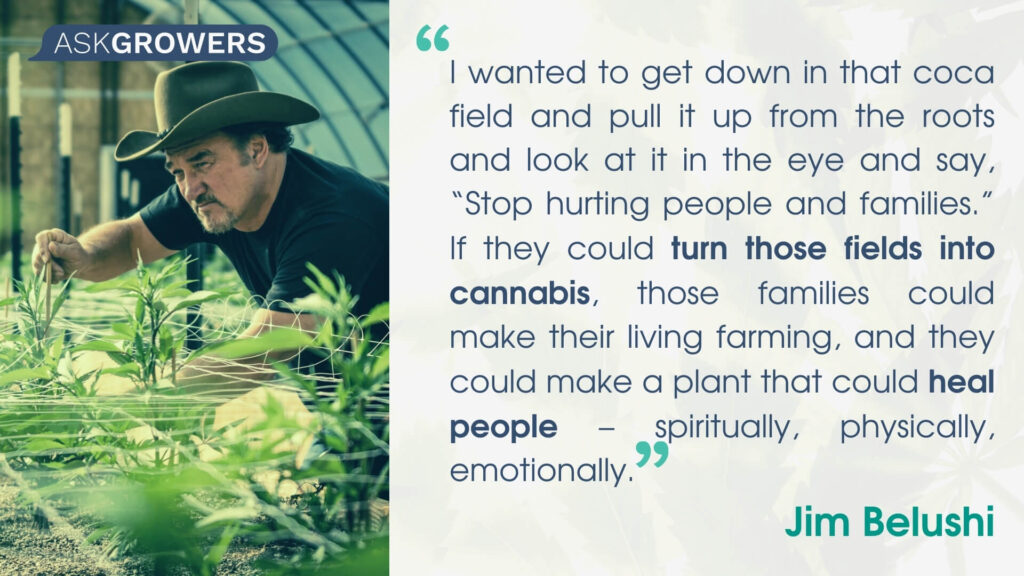 In 2019, Seth Rogen and his long-time friend Evan Goldberg created a brand called Houseplant. Two years later, the brand was premiered in California – so many people visited the website that it crashed. The fact actor entered the market did not come as a surprise as he is a star of several weed comedies and someone who loves pot.

“I mean, I smoke weed all day every day and have for probably around 20 years at this point. I would say I have a very unique relationship with weed in that I require it to function, and I have always been in a place or position to use it as much as I want, basically, with no repercussions (laughs). Which is part of the reason I’ve been able to integrate it into my life to the degree that I have,” Set Rogen told Vogue. 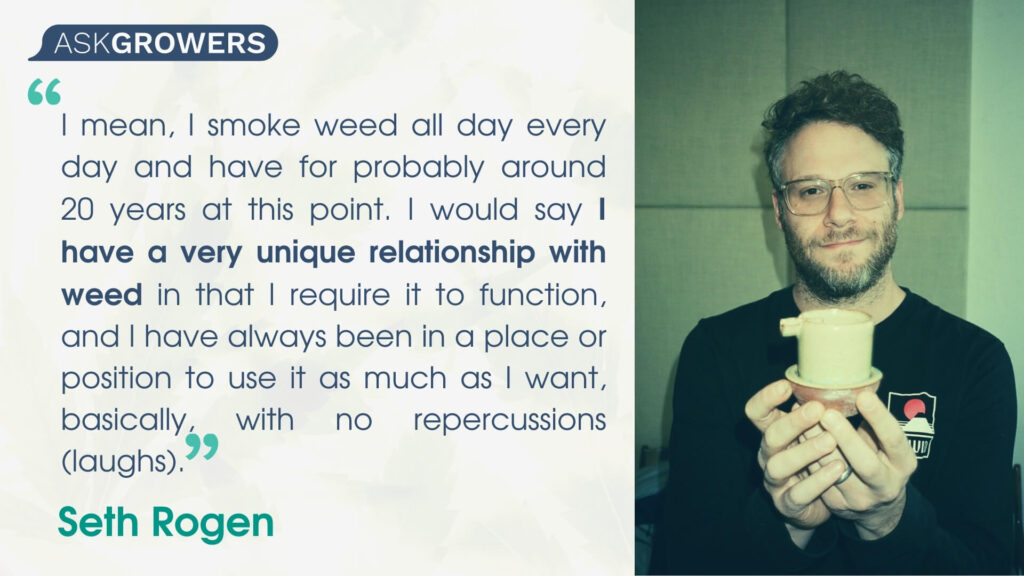 “As weed started becoming more legal, more culturally acceptable, and some of the stigmas around it started to be shed, and people started to understand more why it was illegal in the first place, and things like that – the war on drugs was reframed, thank god, and it became a thing like “Oh, it seems like it’s there will be a time where we could infuse our own sensibilities and creativities into a weed company so why don’t we start thinking about how to do that?” he added.

The company launched a collection of home goods and three of their own strains named after weather systems – Pink Moon (Indica), Pancake Ice (Sativa), and Diablo Wind (Sativa).

“Cannabis has special properties in my experience to enhance meditative reflection, sensual perception, and creative expression. It can dispel negative doubt to reveal the everlasting gift of uniqueness. I advocate cannabis as a door to divine wisdom,” Santana said. 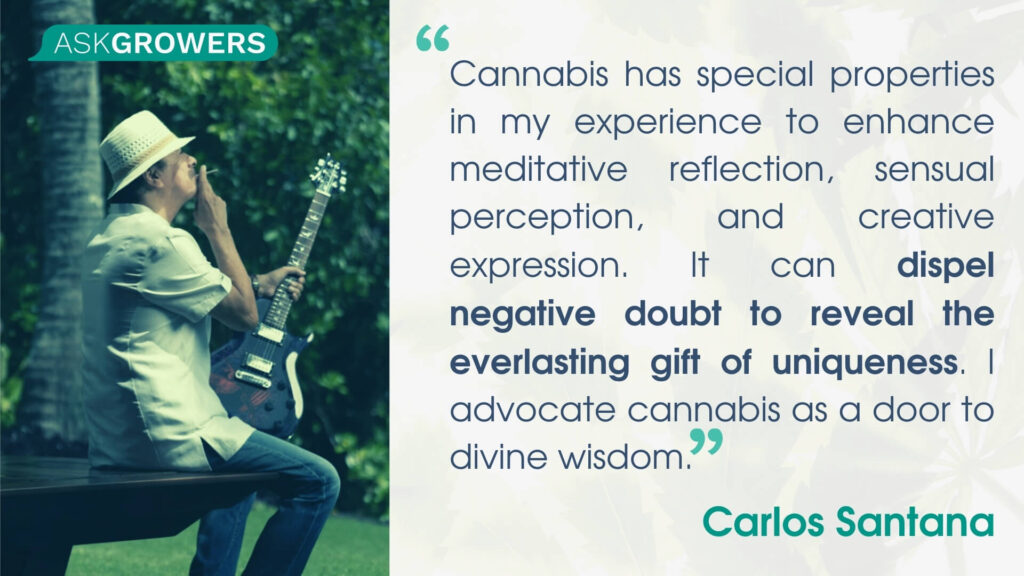 The brand delivers products made of sun-grown cannabis cultivated with traditional patience and artisanal craft. There are three categories of weed, Centered (Indica), Radiance (sativa), and Symmetry (hybrid).

One of the celebs whose name is a synonym for weed is Snoop Dogg. It’s not surprising seeing him in the industry. The times when he was just the musician are gone as he went much further. He is also an actor and cannabis entrepreneur. He was very consistent when it comes to marijuana use advocacy.

“A lot of times, people think I’m just in it for the high. But I’m not, I’m in it for the good of it all and what it does, and it maintains everybody’s mind on a certain level. That’s what the world needs to be at right now. Not that everybody needs to be on marijuana, but it needs to be on a place of understanding, and peace and conversation because there’s so much violence and negativity in the world that this is sort of the answer to that.” Snoop Dogg said. 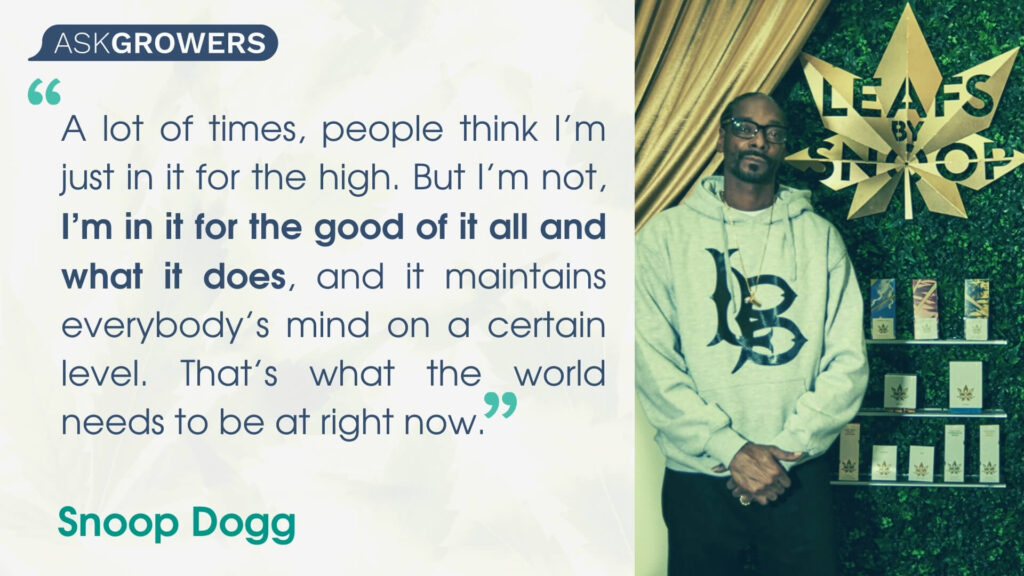 He launched Leafs by Snoop in 2015 with headquarter in Ontario, Canada. The brand specializes in edibles and weed flowers.

Another star that joined the cannabis industry is actor Jaleel White, known for his role as Steve Urkel in Family Matters. The actor partnered up with 710 labs and launched itsPurpl in April 2021 in California. The brand includes variations of Purple Urkle, a popular cannabis strain.

“It’s tough to say really just how long I’ve been kicking around the idea of itsPurpl, years really. I’m just glad I didn’t jump at any of the earlier opportunities because this process with 710 labs has felt fun and organic from the moment we really got started last Spring 2020. And this entire undertaking really helped me feel productive during a pandemic,” Jaleel White said. 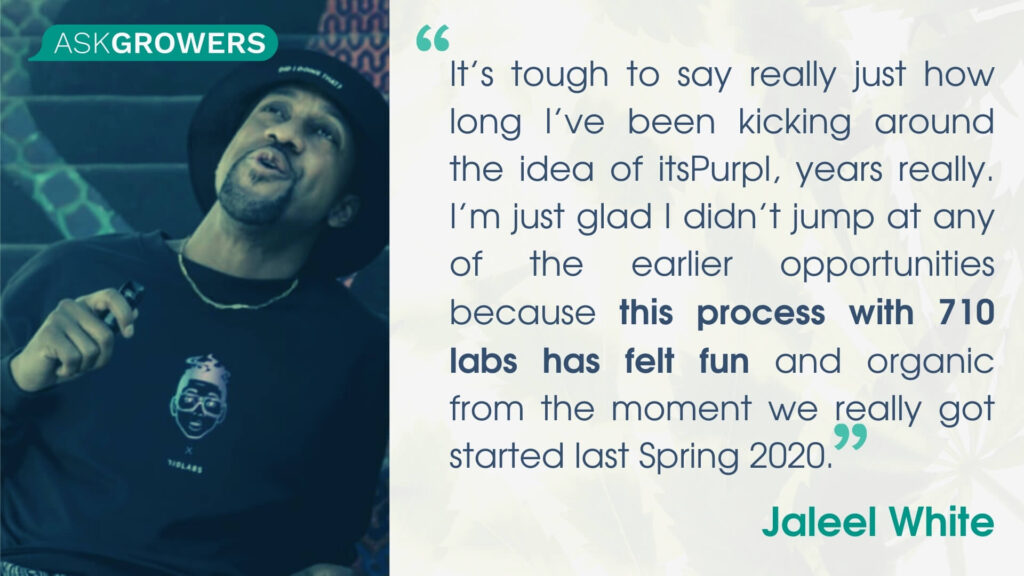 Actress Kristen Bell entered the market in mid-2020 when she launched her brand of CBD products called Happy Dance. The brand’s products have been released in collaboration with Lord Jones, and there are an all-purpose coconut melt, a body butter, and a bath bomb.

The actress said that she first discovered the magic of CBD a few years ago. It was when after a haircut, her hairstylist applied Lord Jones cream on her shoulders.

“I just felt this overall improvement, and at the end of a chaotic day, using any Lord Jones product made me feel like I was either turning down the volume on my children or turning the thermostat of my life to exactly the right temperature,” she told Forbes. Later on, she decided to contact Lord Jones and asked them if they could create some products together. 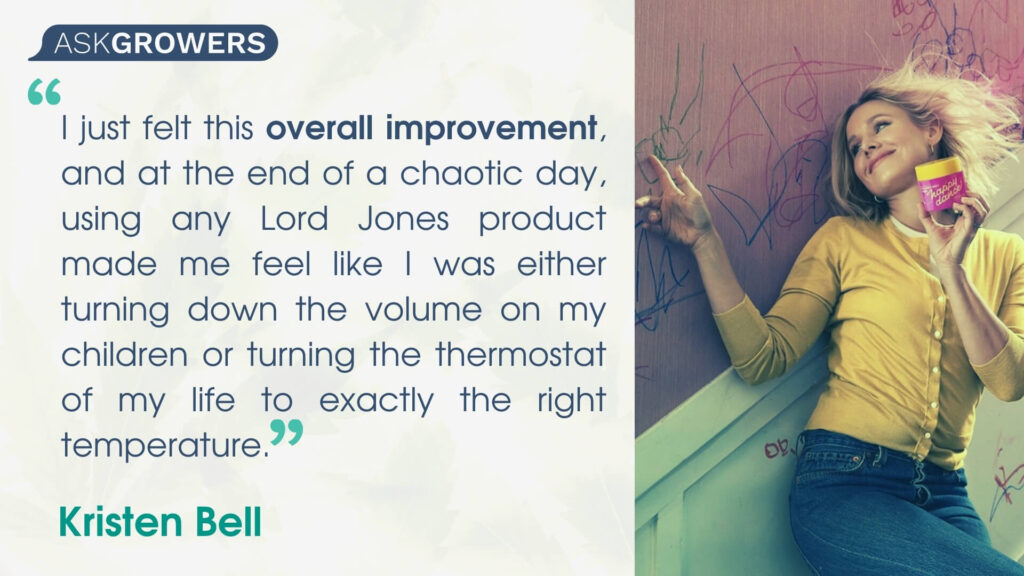 Former NBA player Al Harrington founded Viola Extracts in 2011. The brand is named after Harrington’s grandmother, who suffered from diabetes and glaucoma.

When playing in the NBA, Harrington struggled with various issues, from knee problems to infections. He had many procedures, and he didn’t feel comfortable with pain medications.

“I had a friend at the time who opened up the world of cannabis to me,” Harrington said. “He had everything, from gummies to tinctures. After the NBA, cannabis became my go-to solution for long-lasting ailments. It was like a saving grace that changed everything.” 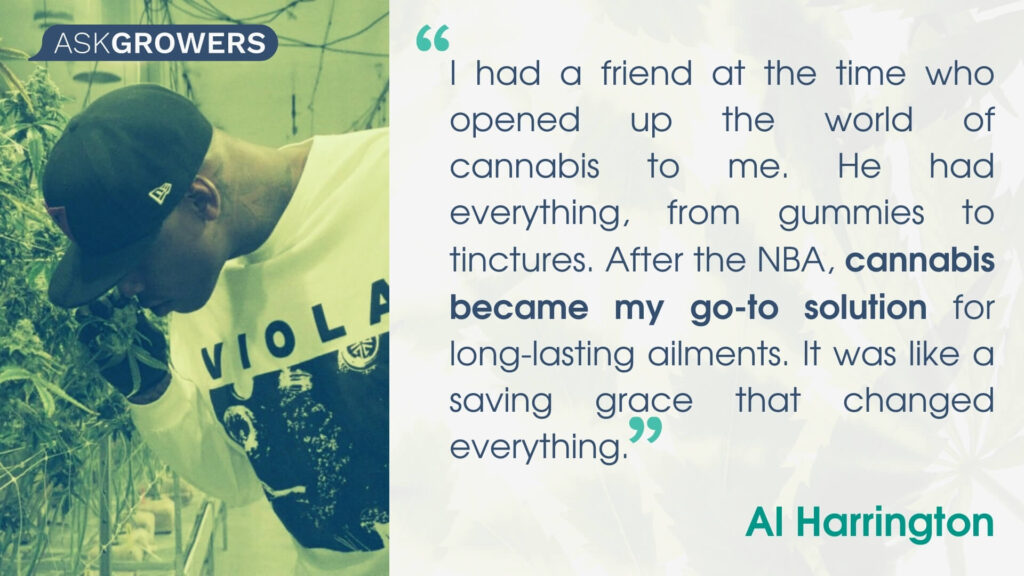 Today, Viola Extracts is one of the leaders in premium quality cannabis products wholesalers and producers.

Every star that decided to become part of the market had some special ideas in mind, and some are more special than others. DJ Khaled proves it with his brand called Blesswell.

The musician is one of the latest celebrities who decided to join the industry as Blesswell was launched in May 2021. “We have to embrace our blessings, but we also have to take care of our blessings ,” says DJ Khaled. “Using these products is almost like watering your plants, cutting your grass, getting a haircut – just taking care of yourself.” 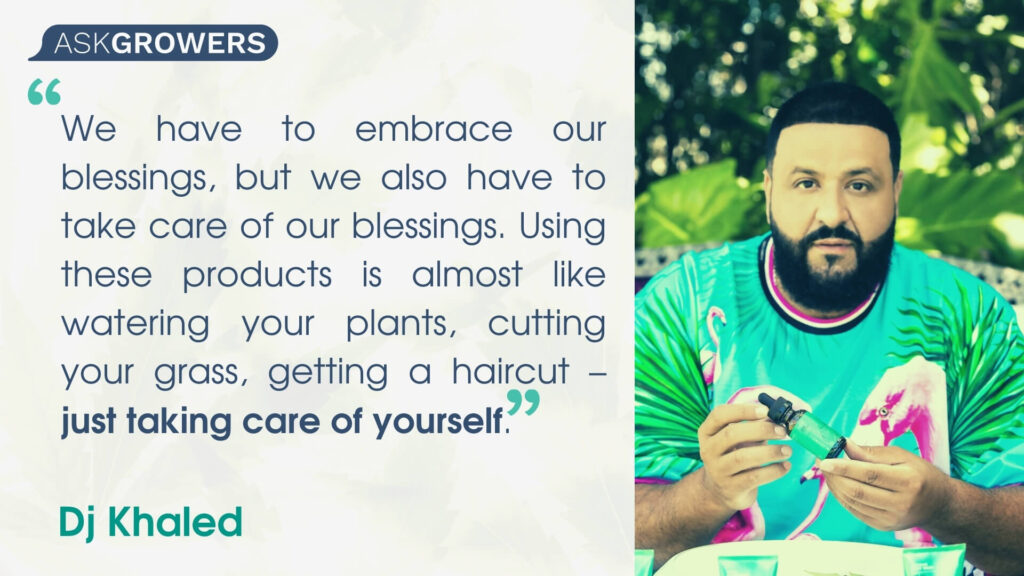 “I love self-care. If you follow Khaled, you know I’m going to motivate you and inspire you to take care of yourself,” the star added.

Why Celebrities Are Closing Their Brands?

Being successful as a celebrity in the cannabis industry may seem like a super simple thing. It is because the weed market differs from other sectors. While attaching a celebrity name next to a product usually brings profits and success in some other areas, that’s not often the case when it comes to marijuana.

Why is that? The answer is quite simple. The majority of those who consume cannabis don’t see celebrity brands as genuine. Instead, they see it as an attempt from a star to earn more money. In addition, the industry keeps emerging, and that’s one more reason why many decide to close the brand. Surviving in a market that keeps changing is quite a challenge.

One of the recent examples of celebrity companies that shut down is Whoopi & Maya. This brand was focused on delivering medical cannabis for women who suffered from menstrual pain. Whoopi Goldberg co-founded the company.

There are also cannabis producers that partner up with celebrities. One example is the partnership between Canopy Growth Corp and Drake, but the relationship ended after less than two years.

It will need some time for everything to build around cannabis, legalization, and industry as a whole. We are probably going to see many new celeb brands in the future. Some will survive and evolve. Others will shut down their companies and move to something else.

At the end of the day, it all comes down to involvement. Those who love something and have a deeper understanding of it will probably be more successful. Adding a name to a brand only for the money doesn’t mean success, especially not in the cannabis market.

© 2021 Benzinga.com. Benzinga does not provide investment advice. All rights
reserved.