It’s fun to have bragging rights over family and friends. But want to see how you stack up against some celebrities?

We’re tracking celebrity brackets for the 2021 NCAA tournament, both in our Bracket Challenge game and when celebrities share their completed brackets.

This story will continue to be updated as brackets lock and BCG points are earned. 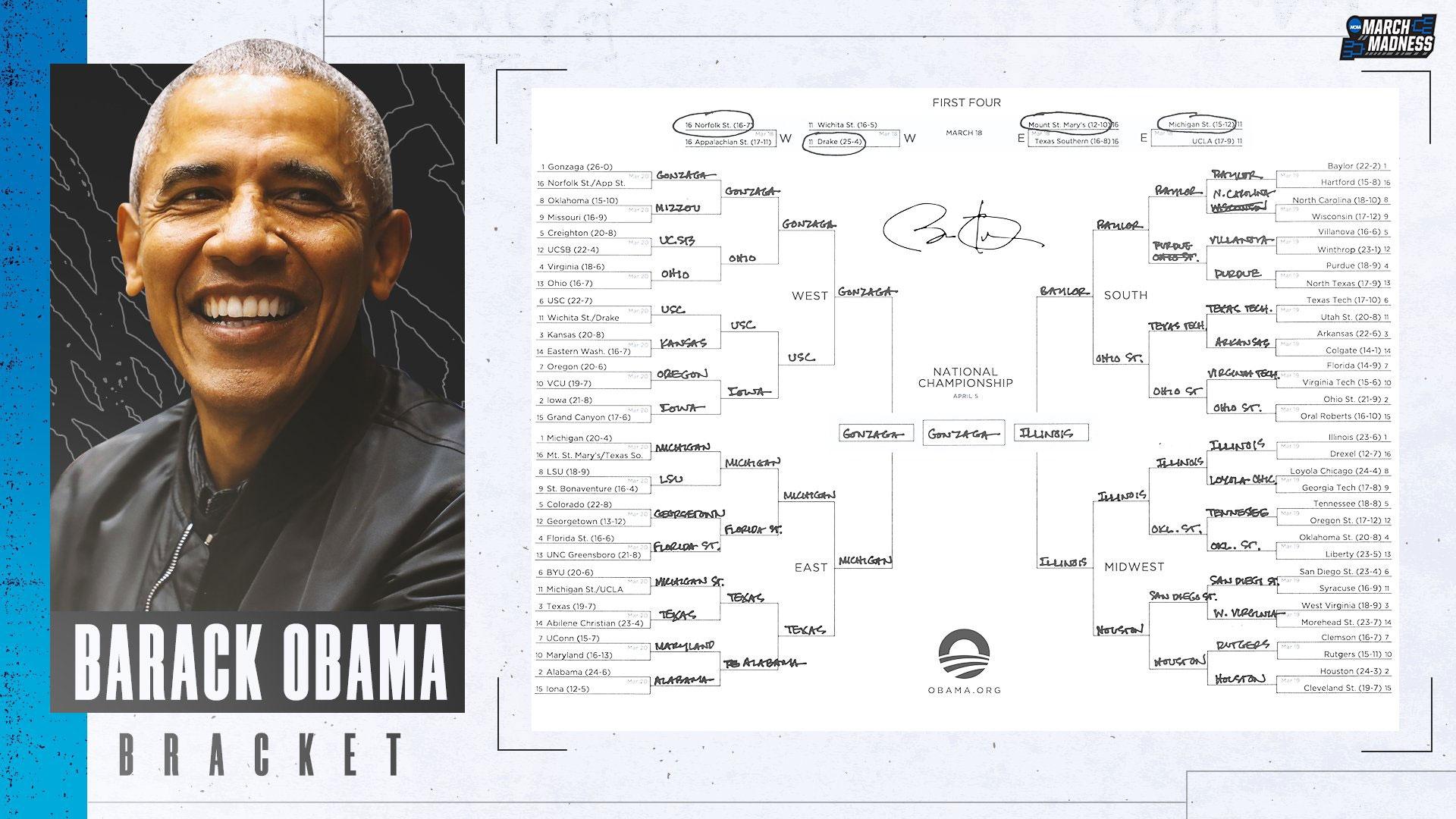 The 44th president has all four No. 1 seeds reaching the Final Four, where he thinks Gonzaga will best Illinois in the title game.

But he does see some surprises happening in the earlier rounds. Obama has No. 13 Ohio defeating No. 12 UCSB for a spot in the Sweet 16. He also has No. 6 USC in the Elite Eight in that same region. 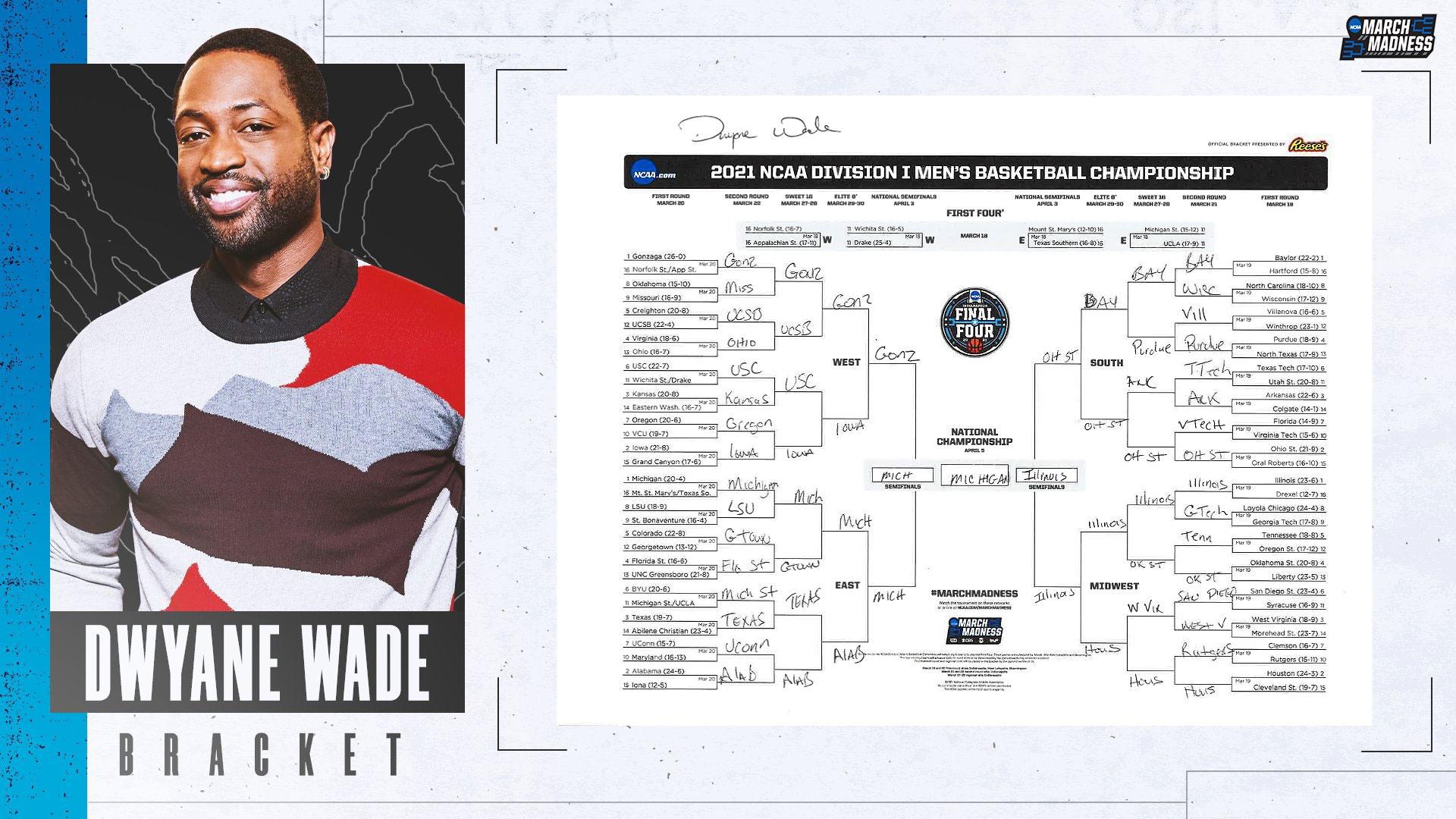 The NBA legend really likes the Big Ten. Wade does not think Gonzaga will make history and finish undefeated. Instead, he thinks the Big Ten will make up three of the four Final Four teams: Illinois, Michigan and Ohio State.

He has Michigan beating Gonzaga in a No. 1 vs. No. 1 battle in the national semifinals before the Wolverines top Illinois to win the national title. If this matchup happens, it’ll be the first intraconference final since Kansas beat Oklahoma in 1988.

Wade also has double-digit seeds No. 12 Georgetown and No. 12 UCSB reaching the Sweet 16. 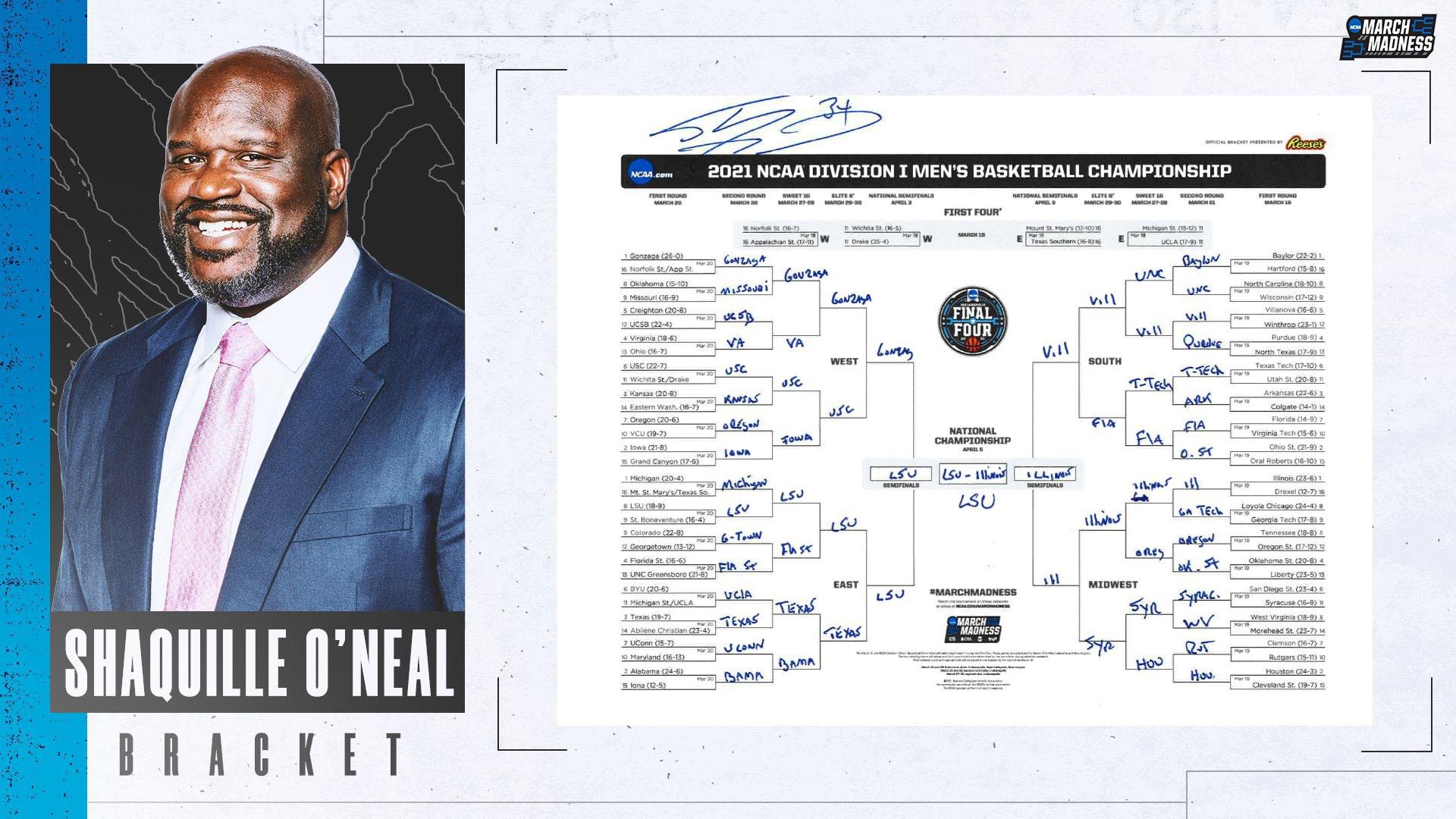 If anyone would be all over LSU as a Cinderella, it would have to be Shaq.

The former Tiger great picked LSU to go all the way, upsetting No. 1 Michigan, No. 4 Florida State, No. 3 Texas, No. 1 Gonzaga and No. 1 Illinois on its march to the national title.

But those aren’t his only surprises. Shaq likes No. 11 Syracuse to reach the Elite Eight. He also has No. 5 Villanova going to the Final Four.

Matt James of “The Bachelor” 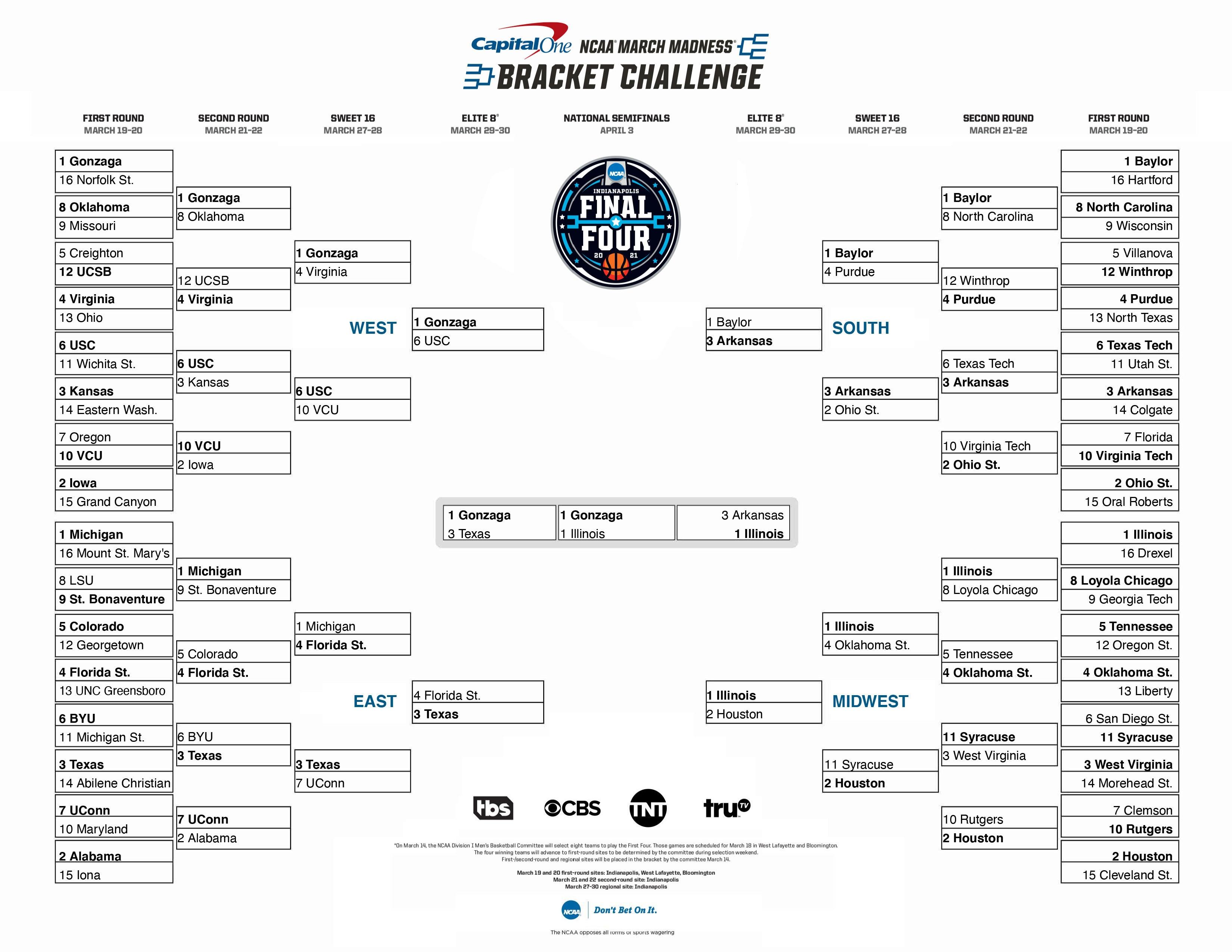 James likes a pair of No. 1 seeds to face off in the final, selecting Gonzaga to beat Illinois. But he also has two No. 3 seeds in the national semifinals in Arkansas and Texas. 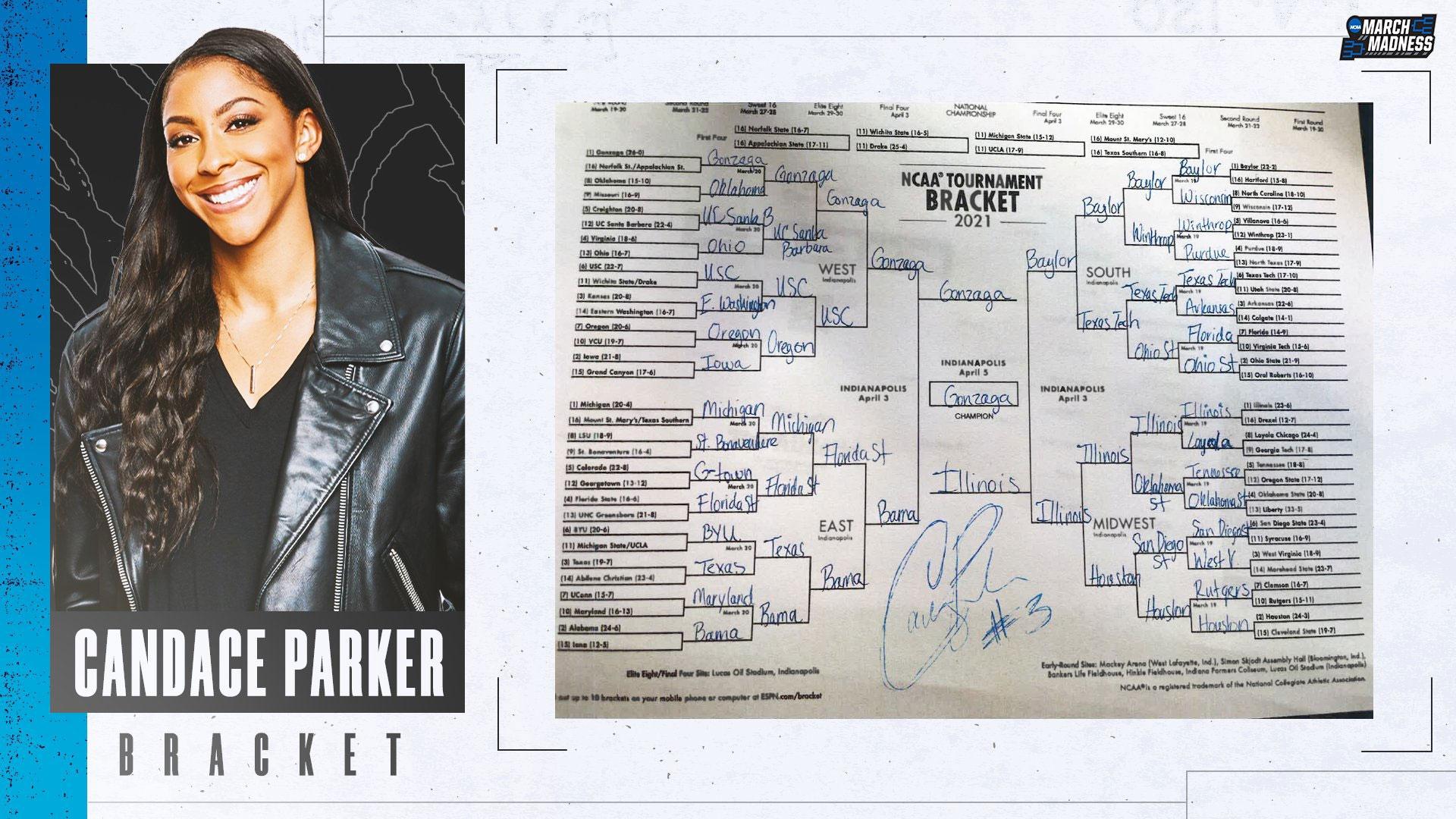 Parker thinks Gonzaga will become the first team to go undefeated since 1975-76 Indiana. With her Final Four of Gonzaga, Alabama, Baylor and Illinois, Parker has the Bulldogs defeating the Illini in the final.

Though Parker’s bracket ends with the No. 1 overall seed cutting down the nets, she has upsets early on. She has both No. 12 UCSB and No. 12 Winthrop advancing to the Sweet 16 — where both bow out to No. 1 seeds. 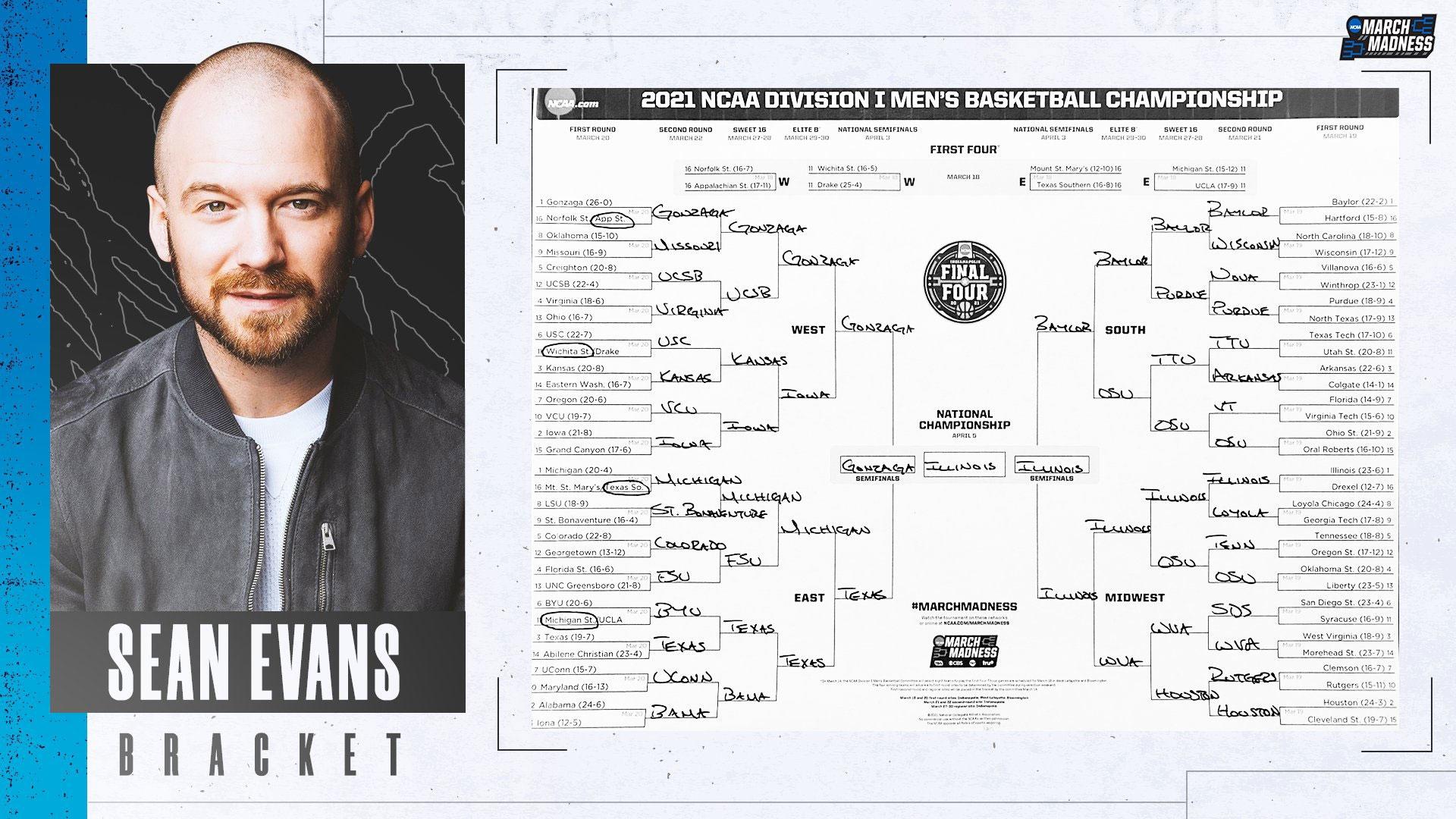 Evans likes the expected favorites in this one, with Elite Eight teams consisting of four No. 1 seeds, two No. 2 seeds and two No. 3 seeds.

In the Final Four, Evans thinks Illinois will beat Baylor and Gonzaga to deny the Bulldogs’ undefeated season in the last game — and win the title for itself.