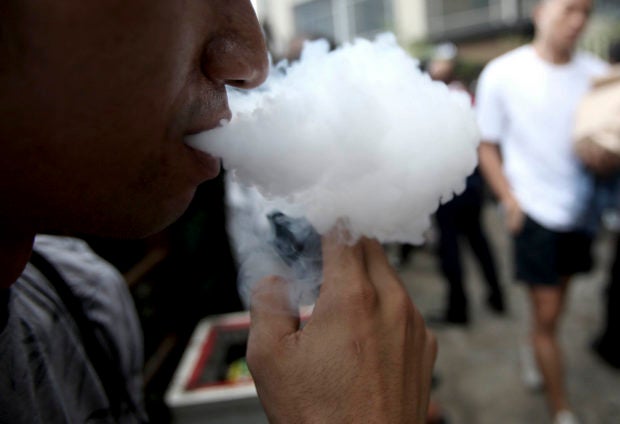 FILE PHOTO:  A man uses a vape in a smoking area in Makati City. INQUIRER FILE PHOTO / RICHARD A. REYES

MANILA, Philippines — A proposed measure on the regulation of vapes and heated tobacco products in the country is also seeking to forbid endorsement of such products by celebrities and social influencers.

Senate Bill No. 2239, which has been endorsed for plenary approval on Wednesday, aims to manage the importation, manufacture, sale, packaging, distribution, use, and consumption of vaporized nicotine products (VNP).

“[A] key feature of this bill is that it will ban celebrities or social media influencers from endorsing these products, whether the endorsement is implied or expressed,” noted Senate President Pro Tempore Ralph Recto during his sponsorship speech.

“There are curbs and limits in advertisements and other forms of consumer communication, including display materials and promotional activities in points-of-sale, retail establishments, direct marketing, and on the internet,” he further explained.

Under the proposed measure, advertisements and other forms of consumer communication will be allowed “points-of-sale or retail establishments, through direct marketing, and on the internet.”

But it bars celebrities or social media influencers from being featured in such advertisements and other forms of consumer communication.

These ads, it added, should not “contain an endorsement, implied or expressed, by a celebrity or social media influencer.”

“Individual or team athletes, artists, performers, influencers, and health professionals are likewise prohibited from receiving remuneration, in whatever form, for promoting or encouraging the use of Vaporized Nicotine Products,” the bill further stated.

Recto also said the proposed law limits corporate sponsorships to industry associations or trade events that are open only to adults.

Don’t miss out on the latest news and information.