Upbeat tunes, 700 meals and the famous chef Roy Choi and his partners took over Thunder Studios‘ parking lot as they met hundreds of drivers picking up tacos during a free food event in Long Beach Sunday afternoon.

The rush came at around noon when the event kicked off, as drivers snagged up nearly all the meals within an hour. The food truck was scheduled to be there until 4 p.m., according to the website of Kogi BBQ, the business giving food away.

Choi, the co-owner, co-founder, and chef of Kogi BBQ, said that this event is just one of many ways in which his business has been giving back to communities in need. When COVID hit, saw the livelihoods of workers in the food and beverage industry fall apart.

In the food and beverage industry, “you can’t last,” he said about the shutdowns that devastated small businesses across the country. All of Choi’s catering business disappeared, which amounted to half of Kogi’s business, he said.

Realizing that many in his industry have lost their jobs, Kogi wanted to give free food to them, and Sunday’s event was just their latest event in Long Beach, he said. He also wanted to keep his team employed, so he ditched the for-profit business model and then people started fueling his idea with donations, which allowed him to feed more people. 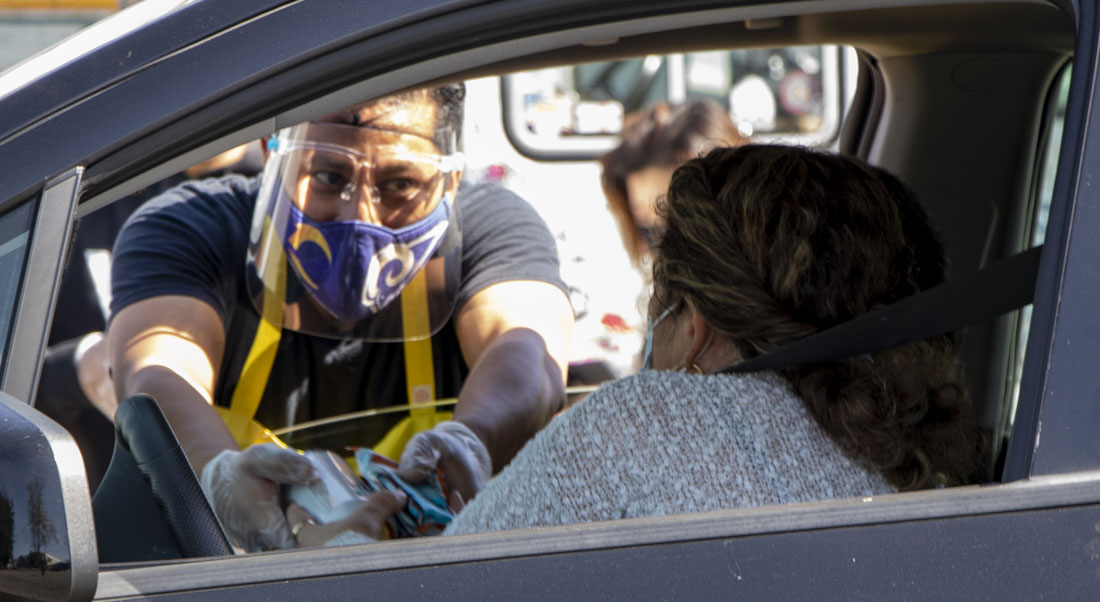 A worker hands over food to a driver during a free food event at Thunder Studios in Long Beach on Sunday, Feb. 28, 2021. Photo by Crystal Niebla.

On paper, Choi said his business doesn’t make sense. But to him, it’s “a spiritual point of view” to support neighborhoods in need of the most help, which matters more to him.

“Even though we (Kogi) grew, we never wanted to lose touch with the streets,” he said.

Their first giveaways started at the beginning of the pandemic shutdowns last spring, such as dropping off food in shelters, hospitals and community centers, he said. Choi has hosted similar events last year in Carson, San Gabriel and Whittier particularly for workers who have lost their jobs as a result of the pandemic.

“In a way, it’s like a motherly love,” he said about why gives free food.

Another way Choi said that he’s committed to giving people access to food is by keeping his prices low—despite inflation. Over the past 12 years he said Kogi has only raised the price of his $2 tacos, for example, by 50 cents. Choi, born in Seoul, Korea and raised in Los Angeles, is known for his Mexican-Korean fusion cooking and for producing multiple shows and movies such as “Chef,” “The Chef Show” and “Broken Bread.”

“I’m inspired by him, to be honest,” said Michelle Sobalvarro, of New Belgium Brewing, one of the partners for the event. Kogi partnered with Voodoo Ranger IPA and Thunder Studios for the event.

Others see his efforts, too. On Sunday, a few drivers pulled up and gave Choi gifts.

“It’s always tough to receive gifts because I’m just a giver,” he said. “I almost shed a tear.”

Hyperlocal news is an essential force in our democracy, but it costs money to keep an organization like this one alive, and we can’t rely on advertiser support alone. That’s why we’re asking readers like you to support our independent, fact-based journalism. We know you like it—that’s why you’re here. Help us keep hyperlocal news alive in Long Beach.