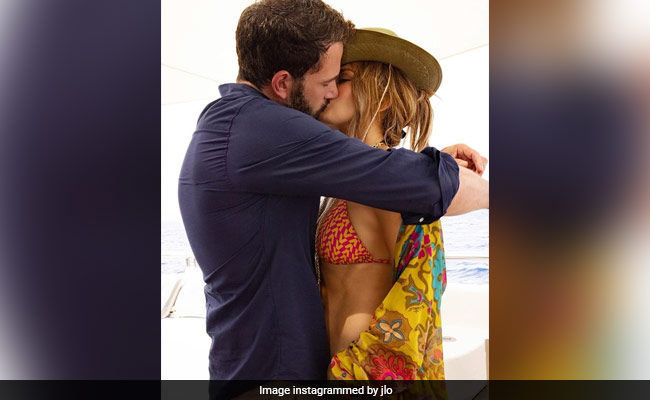 Jennifer Lopez has made things ‘Instagram official’ with Ben Affleck.

Are they dating or are they just good friends? This is the question that most people ask as soon as two celebrities are spotted together. While paparazzi pics and subtle hints are all well and good, what fans really wait for is the moment a couple makes things ‘Instagram-official’ by posting a pic together. Jennifer Lopez recently had her fans over the moon when she made things Instagram official with Ben Affleck. The singer-actress and her former fiance reignited their romance earlier this year and brought in JLo’s birthday together on a yacht recently.

Jennifer Lopez posted pics from her birthday celebrations on Instagram this Saturday. One of the pics features her kissing Ben Affleck. “5 2 … what it do …”she captioned the photos.

As expected, within minutes of the photo being shared online, fans had started flooding social media with congratulatory posts for the couple for confirming their relationship. Of course, Jennifer Lopez and Ben Affleck are not the first celebrity couple to have made things official on Instagram, and nor will they be the last.

On Valentine’s Day 2020, Gigi Hadid and her on-again, off-again boyfriend Zayn Malik confirmed they were back together. The supermodel posted a picture of Zayn Malik on her alternate Instagram account and captioned it, “HEY VALENTINE. Z on the farm. Dec 2019,” along with a heart emoji. December 2019 is when the couple is thought to have rekindled their romance.

Last month, actor Cole Sprouse confirmed his relationship with girlfriend Ari Fournier. “Tippi and the birds,” he captioned a picture of Ari that he shared on Instagram.

Kaley Cuoco and Karl Cook, happily married today, had confirmed they were dating back in 2016 with this adorable pic. “Finally,” the Big Bang Theory star had captioned the picture, which shows the two kissing.

Katy Perry and Orlando Bloom also sort-of confirmed their relationship in 2016, when Katy posted a picture of them sprawled out on the steps of the Hotel du Cap Eden-Rock at Cannes, according to E! Online. The pic caused massive speculation as Orlando Bloom had not been tagged – but fans are now pretty much certain it features the Troy actor.

Which post is your favourite? Let us know using the comments section.