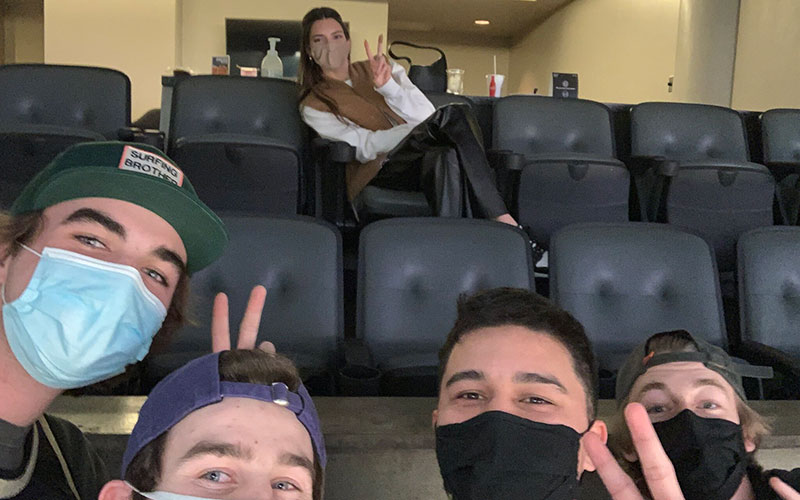 Olympic gold medalist Michael Phelps is among those who have attended Phoenix Suns games. Tickets are at a premium now that the team is in the postseason. (Photo courtesy Phoenix Suns)

From high-profile fans to high-priced tickets, the Phoenix Suns are enjoying the fruits of playing under a national spotlight.

Celebrities ranging from professional athletes to TikTok stars are occupying courtside seats. Some tickets for tonight’s Western Conference semifinal Game 2 against the Denver Nuggets are pulling in $2,000-plus. Meanwhile, the national media is chronicling every move.

“I covered most of the (Steve) Nash-era glory days from very close range, so I was never going to forget what the NBA playoffs sound like in Phoenix,” New York Times NBA reporter Marc Stein said. “But it’s been more than a decade since we’ve seen the Suns on this stage and the fan exuberance is pouring through the screen for those of us watching from afar.”

The national popularity of the Suns has been on the rise all season. They had 21 national televised games on their schedule, up from one in 2019-20. They are coming off an impressive first round win over the defending champion Los Angeles Lakers, allowing the nation to see what many in Phoenix already knew.

They are a legitimate title contender.

Celebrity support is often a strong barometer of success. It’s not just attention from model Kendall Jenner, who is in a high profile relationship with guard Devin Booker, but from other stars, too, including swimmer Michael Phelps and chef Guy Fieri. Professional athletes are frequently at games, including J.J. Watt, Kyler Murray, Diana Taurasi, Larry Fitzgerald, Patrick Mahomes and Travis Kelce.

Even attendance is skyrocketing. The Suns finished inside the NBA’s top 10 in attendance for the first time since 2007. And as their popularity grows, so do ticket prices.

On Tuesday, the lowest ticket price for Game 2 on Vivid Seats was $129, and the most expensive was over $2,000. The Suns are the hottest ticket in a city hungry to see an NBA title for a team that has never won one.

They have a strong young core of players, most notably Booker. He is emerging as the next superstar in the NBA and hasn’t disappointed while performing on the national stage. The 24-year-old already has an impressive resume, which includes winning the 2018 3-point contest, landing two All-Star appearances and posting a 70-point game. He also has the Suns’ top-selling jersey in the NBA team shop. 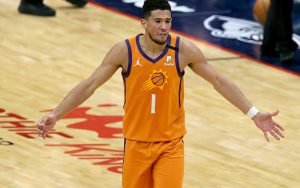 Devin Booker is no longer the NBA’s best-kept secret. He has earned national attention with his standout play. (Photo by Sean Gardner/Getty Images)

“He believes he’s one of the best players in the league,” coach Monty Williams said. “He doesn’t believe there is a better person at his position, and I am certain that he believes that he is one of the top players. … This is where you get to show it in the playoffs and this is the moment that he wanted.”

Booker doesn’t benefit from the same national recognition as other NBA greats, even after he showed flashes of brilliance during the bubble last season where he almost single-handedly led the Suns into the playoffs as the eighth seed without Chris Paul.

“I think Booker’s reputation actually went to another level in the bubble before this season even started,” Stein said. “He almost led the Suns to the playoffs from an impossible position at Walt Disney World and big things were expected after the Chris Paul trade. Maybe not a No. 2 seed and a first-round victory over the Lakers, but I don’t think anyone was overlooking Devin Booker entering this season.”

Eleven years have passed since the Suns last played in the postseason, so it is not surprising the city is so excited.

So are others. The Suns are a tick behind the Utah Jazz as the most searched Western Conference team worldwide in the past 30 days. On a scale of 0-100, the Bahamas, the home of center Deandre Ayton, rated a 100 followed by the United States at 56 and Puerto Rico at 38. The Suns are becoming a team that is known worldwide.

Joey Serrano expects to graduate in August 2021 with a bachelor’s degree in sports journalism. Serrano has interned at East Village Times.