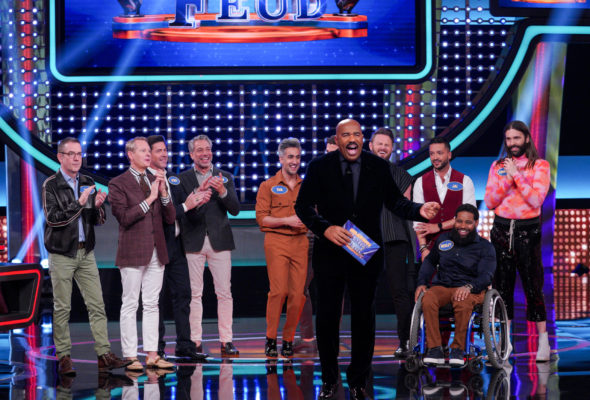 Survey says… renewed! ABC has quietly renewed the Celebrity Family Feud TV show for a seventh season which will reportedly air this summer.

The sixth season of Celebrity Family Feud averaged a 0.75 rating in the 18-49 demographic and 4.98 million viewers. Compared to season five, that’s down by 11% in the demo and down by 4% in viewership. The 11 episodes aired between Summer and Fall 2020, due to the network needing to fill the fall schedule due to the pandemic shutdown.

According to Buzzer Blog, season seven is currently being filmed under COVID-19 restrictions. Here’s information about the contestants:

The full roster of celebrities has not yet been unveiled. However, some celebrities have been spotted on set recording. Competing on Celebrity Family Feud so far are singer-songwriter Max Frost; Wendi McLendon-Covey (The Goldbergs, Reno 911!); Loni Love (The Real); Ross Matthews (The Drew Barrymore Show, RuPaul’s Drag Race); the podcast Fake Doctors, Real Friends including Scrubs stars Zach Braff and Donald Faison; comedy troupe Beer Shark Mice including Neil Flynn (also of Scrubs) and David Koechner (Anchorman); and the annual NFL Legends game.

What do you think? Have you enjoyed the Celebrity Family Feud TV show? Are you looking forward to watching season seven on ABC?