Over the weekend Brooklyn Beckham married actress Nicola Peltz in a £2.6million wedding in Miami, Florida surrounded by their family, friends and a bunch of celebrities.

The couple were married at Nicola’s father’s home in Palm Beach with as part of a three day event to celebrate their nuptials. The celebrations began on Friday evening with a dinner followed by the actual ceremony on Saturday and a group brunch yesterday.

In pictures released by Vogue, Nicola is seen wearing a Valentino couture dress and Brooklyn wore a Dior suit.

A number of celebrities were invited to the wedding including actual royalty Prince William and Kate Middleton, however the royals reportedly declined the invitation.

Elton John, Brooklyn’s godfather, also missed the wedding due to tour dates, but that didn’t stop a bunch of A-Listers celebrating the wedding with the couple.

These are all the celebrities who attended Brooklyn Beckham and Nicola Peltz’s wedding: 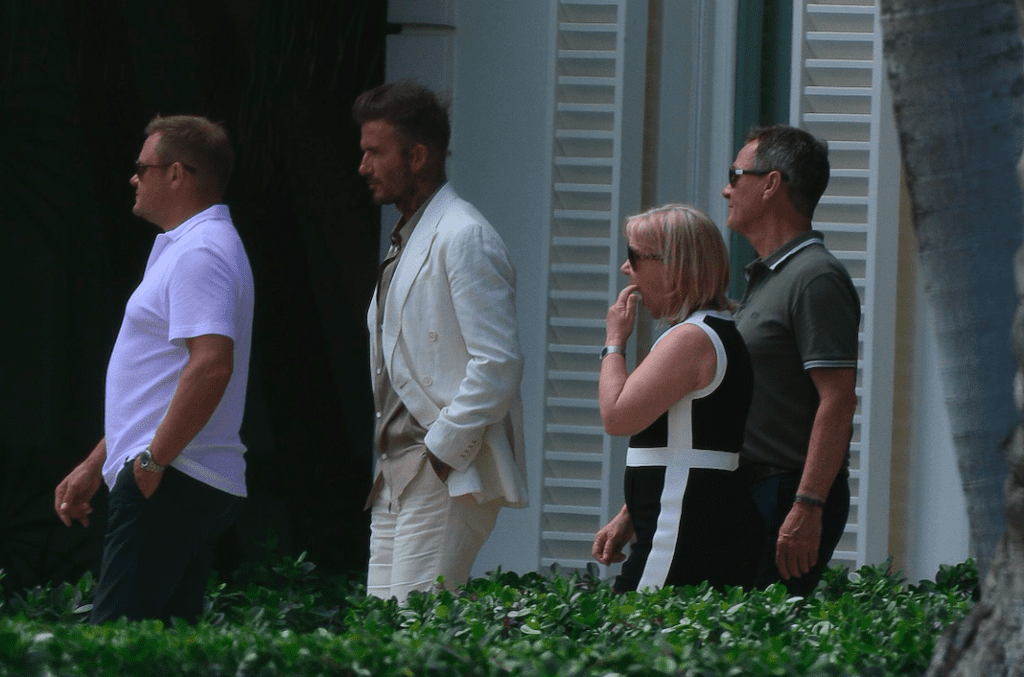 Of course the entire Beckham clan were in attendance for Brooklyn’s wedding. Brooklyn’s little sister Harper was one of the flower girls for the wedding.

His younger brothers Romeo and Cruz were both best men and delivered speeches at the wedding breakfast. Nicola and Brooklyn broke with tradition by having David Beckham, father of the groom, make a speech.

David is said to have cried whilst making his speech and shared his love for Brooklyn whilst welcoming Nicola to the family.

Model Mia Regan is currently in a relationship with Romeo Beckham and was his date to the wedding.

She wore a dress designed by Victoria Beckham.

Gordon Ramsay and his family are longtime friends with the Beckhams and they attended the wedding.

Gordon was joined by his wife Tanya and their daughters Megan, Holly and Tilly, who recently starred on Strictly Come Dancing.

Holly shared a picture of the family together at the wedding. Holly wore a black dress with a leg slit, Megan wore a blue v-neck dress and Tilly wore a burgundy dress.

Unfortunately there wasn’t a total Spice Girls reunion at Brooklyn and Nicola’s wedding but three out of five the band members were.

Of course Victoria Beckham was there as well Mel B and Mel C. Geri was unable to make the ceremony as she was travelling with her husband to Australia.

Emma Bunton was meant to be in attendance but pulled out at last minute, however she shared a post dedicated to the couple on Instagram.

She wrote: “These two beautiful souls are getting married today! I’m so sorry I couldn’t make it there to celebrate you both. We Love you all very much. @victoriabeckham @davidbeckham try not to cry to much!!#happytears ❤️❤️”.

The Williams sisters were both in attendance at the wedding as they are friends with Victoria Beckham.

Venus wore a number of looks over the weekend. Yesterday she posted a photo of herself in a red fringe dress and on the actual wedding day she wore black sequin dress by Alessandra Rich.

Serena wore a bright pink dress for the actual wedding ceremony and stayed up till the early hours of the morning celebrating the couple.

Posting on her Instagram stories yesterday at 4am she said: “It’s so time for me to go to bed right now, I’m like, go to bed Serena, go to bed. I just need an intervention on sleep. Goodnight – or good morning!”

Actress and longtime friend of Victoria Beckham, Eva Longoria was another celebrity guest at Brooklyn and Nicola’s wedding.

She wore a dress designed by Victoria for the day and shared pictures of herself and the Williams sisters celebrating.

Kiernan Shipka from Netflix’s The Chilling Adventures of Sabrina attended the wedding and shared a number photos the day after the ceremony on her Instagram story.

Daughter of the late Kobe Bryant, Natalia Bryant was a wedding guest. She wore a blue dress for the ceremony and posted on her Instagram sharing her best wishes for the couple.

She said: “Had the most amazing time this weekend celebrating the love of two of the sweetest people I know. ❤️ Nicola and Brooklyn, thank you so much for having me. You two are so incredibly loved. Congratulations @nicolaannepeltz @brooklynbeckham.”

Jonathan Cheban, aka the Food God and Kim Kardashian’s best friend, managed to snag an invite to the wedding of the century.

He wore a diamond bow-tie as part of his look to the ceremony.

Related stories recommended by this writer:

•Right so just how rich are Brooklyn Beckham, Nicola Peltz and their families?

•An investigation into Brooklyn Beckham’s past flings and girlfriends